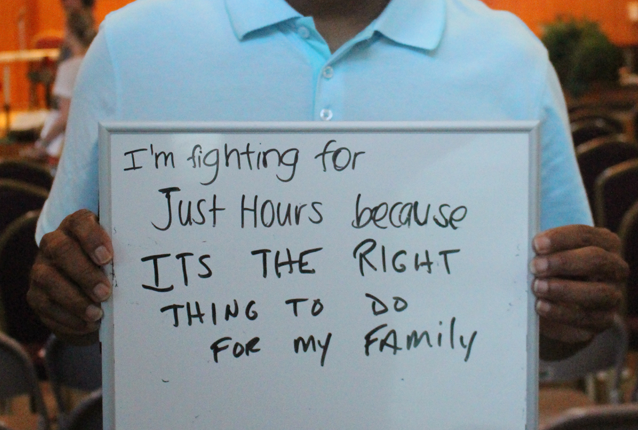 DC residents are rising up for just hours and fair schedules

CHECK OUT THE JUST HOURS CAMPAIGN WEBSITE AT DCJUSTHOURS.ORG

With the DC minimum wage set to rise to $11.50 by 2016, more than 40,000 workers will see a crucial boost to their wages. Yet wage increases alone cannot turn low-wage jobs into middle class ones. For many District residents – especially those working in retail, food service, and custodial jobs – getting enough hours to make ends meet and having fair, transparent schedules are just as important. Because our residents need enough hours and stable schedules to provide for their families, DC Jobs With Justice is leading a “Just Hours” campaign to transform service sector jobs into jobs with just hours and fair scheduling.

Read more about the campaign for Just Hours and fair schedules:

The next labor fight is over when you work, not how much you make, Washington Post, May 8th